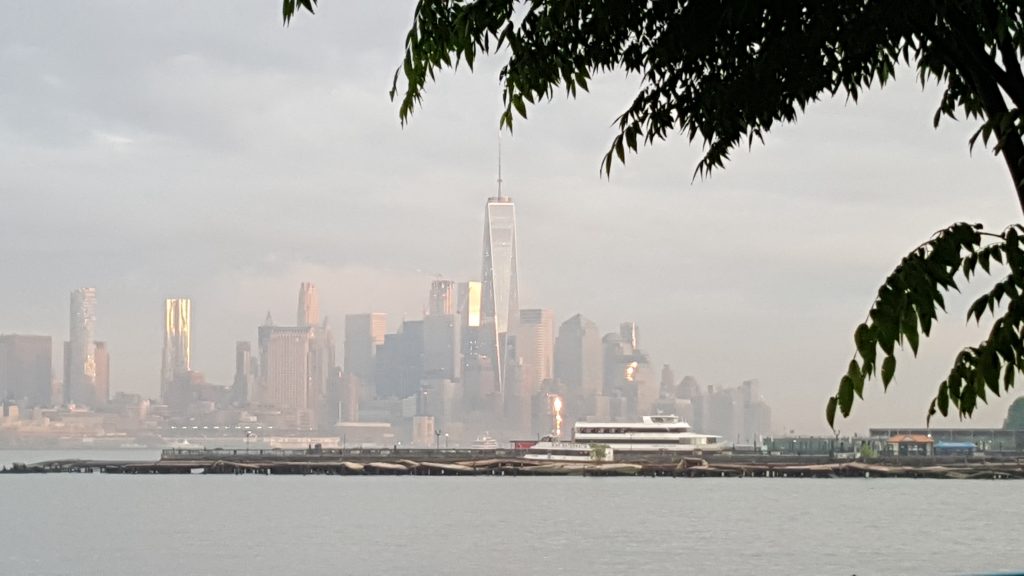 Now their footprints remain. A ‘place of remembrance and quiet reflection’, a memorial to the souls beneath. 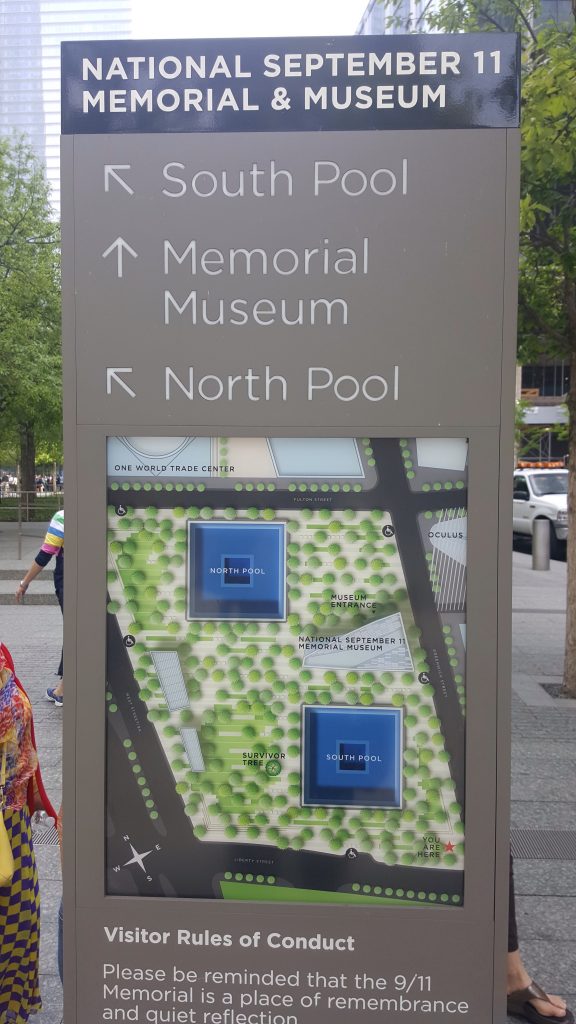 My friend is no longer with us so for me the memorial brings back memories of friendship and lost love ones as it does for many around the world, whether indirectly or intimately touched by the events in September 2001. American flags and single white roses catch the sun, highlighting names keeping loved ones close. 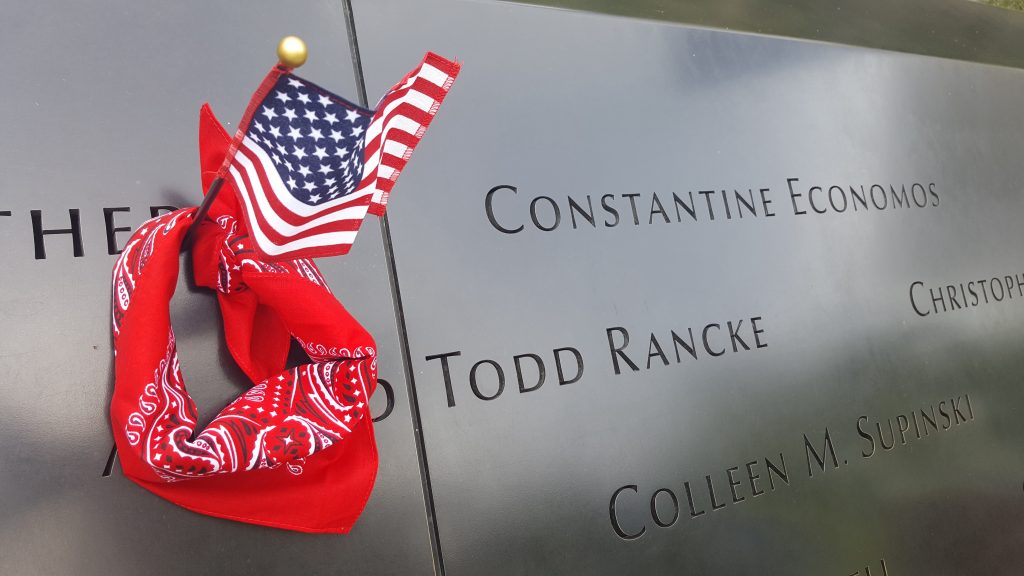 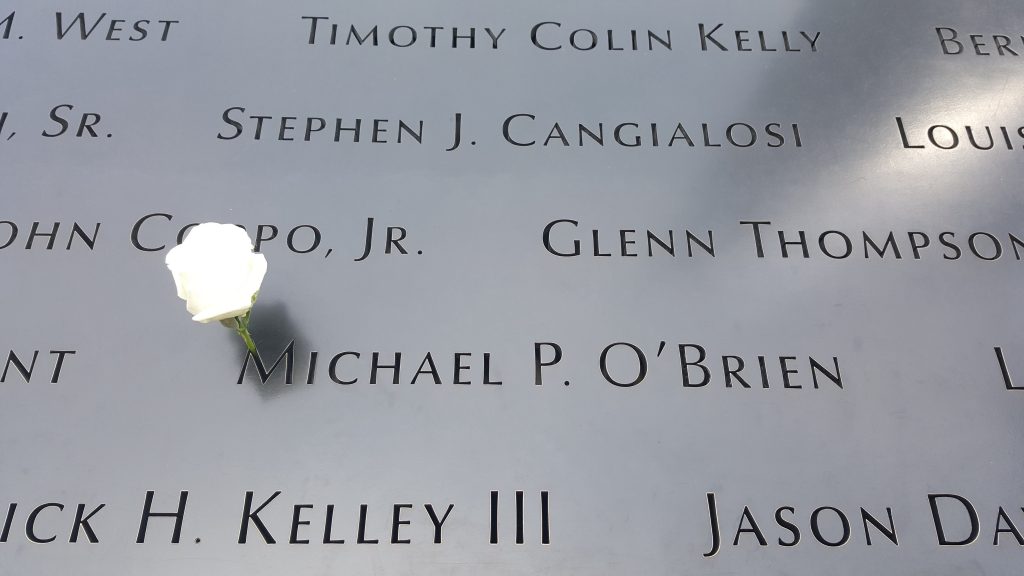 I stand and watch as the water cascades over the silver walls and disappears into the earth beneath, daydreaming before gathering my thoughts. It’s said that Negative ions are released by falling water and have a healing effect. Working overtime, they do the best they can. Surprisingly sadness avoids me as I linger instead on the good times.

I am struck by the simplicity and harmony, surrounded by around 400 white oak trees, buildings standing tall protecting sacred spaces. North and South pools glistening. Symbolically cleansing, nourishing and constant. 2983 names etched into the bronze framework, lest we forget. The names have been arranged so that loved ones rest next to each other, co workers side by side, relationships enduring. Now I remember unanswered calls waiting to hear from friends who worked for United AIrlines at the time. All were safe. All knew a crew member who was not.

The bright red doors of Ladder 1, Engine 7, Ladder Co. 10 ‘New York’s Bravest’ stand ready to burst open without hesitation if the city should send out her distress signal, again. 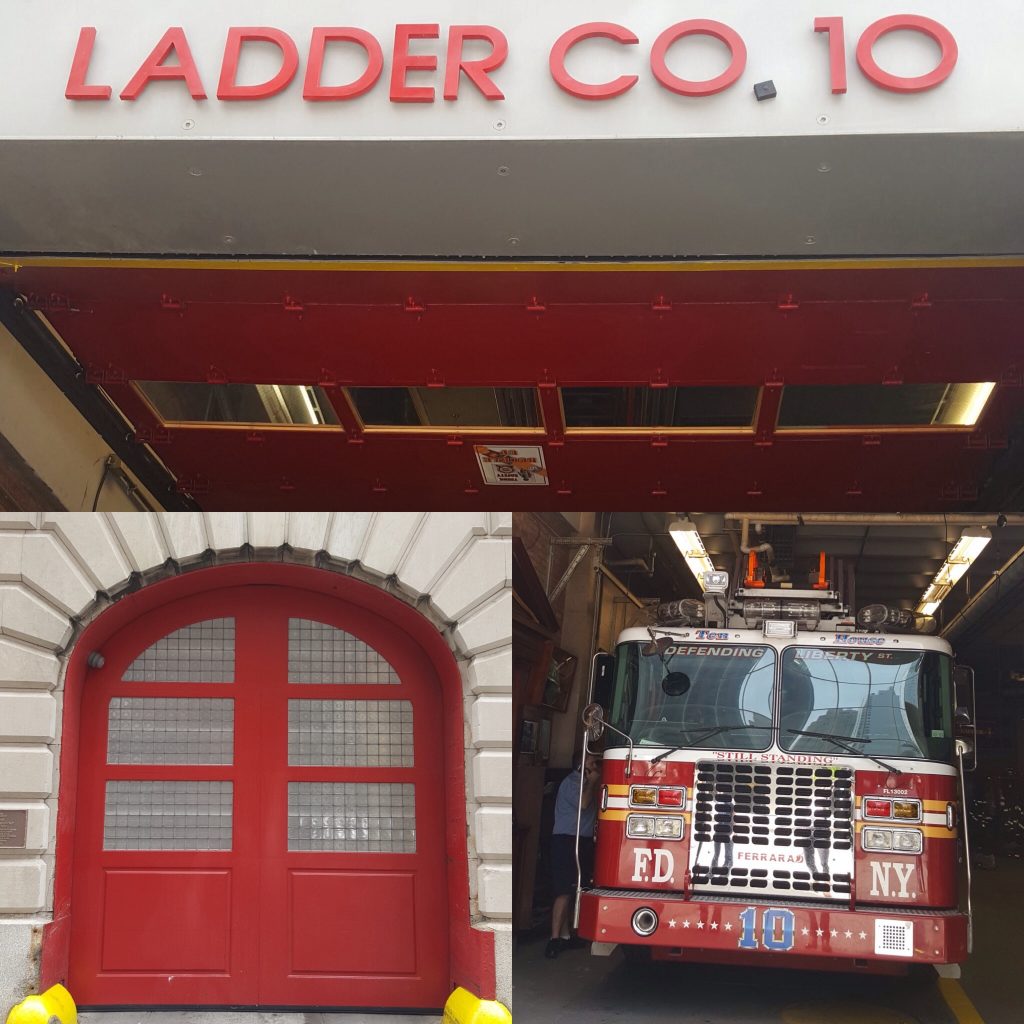 The spire on the roof pierces the blue sky as One World Trade Centre rises from the ashes like a Phoenix dominating the Manhattan skyline, wedged between Tribeca and Battery Park. 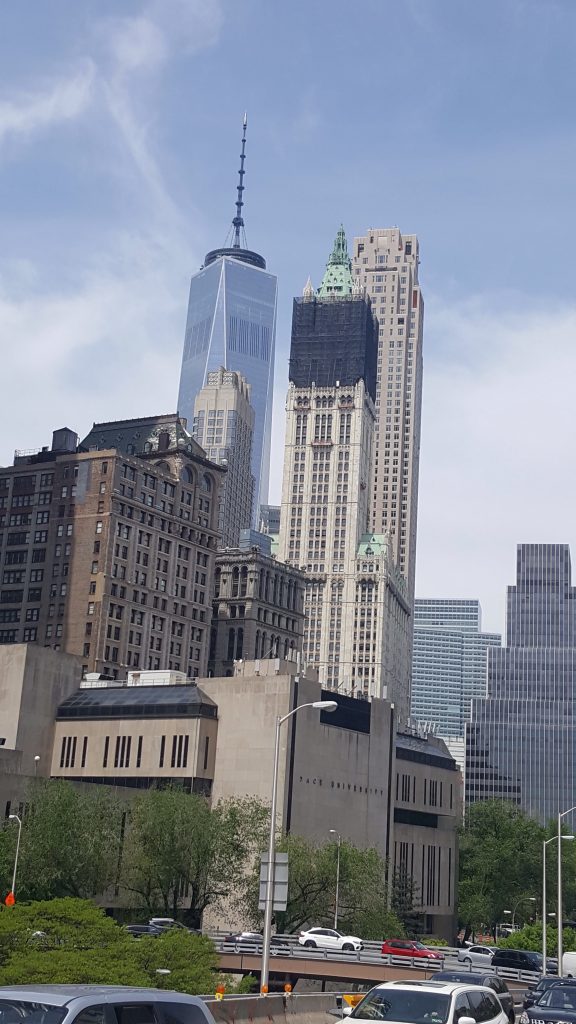 From Jersey City, a lone woman sits gazing, arm shielding the sun, reminiscing or admiring the view, separated by the Hudson, witness to the best view in town. 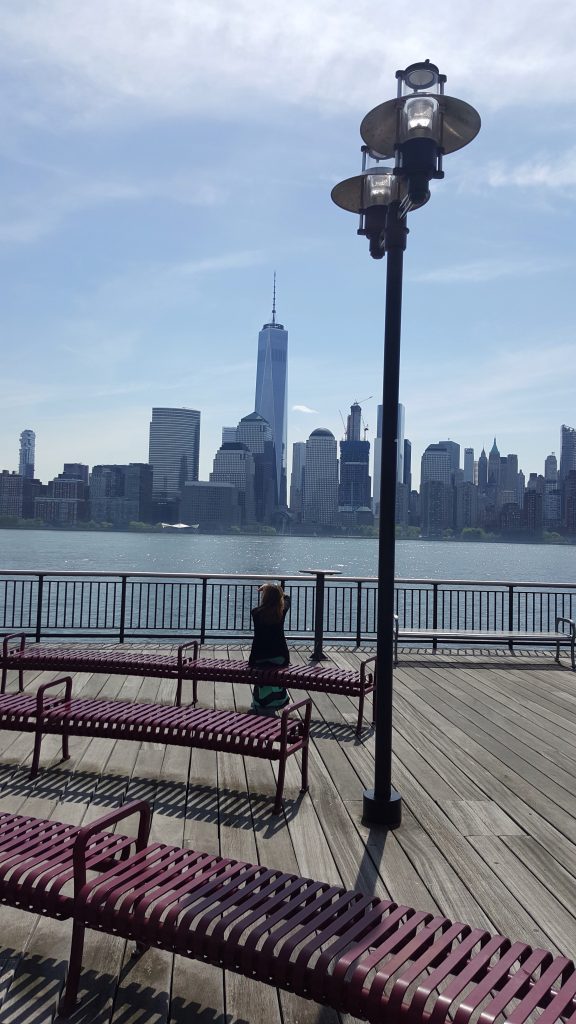 WTC two, three, four and seven, huddle in close. A landmark defiant and proud, catching and projecting reflections, watches over you, peering through buildings as you change vantage points, circling around the block. It’s the Western Hemisphere’s tallest building and number four in the world where elevators guide passengers 541 metres to the top in sixty seconds. 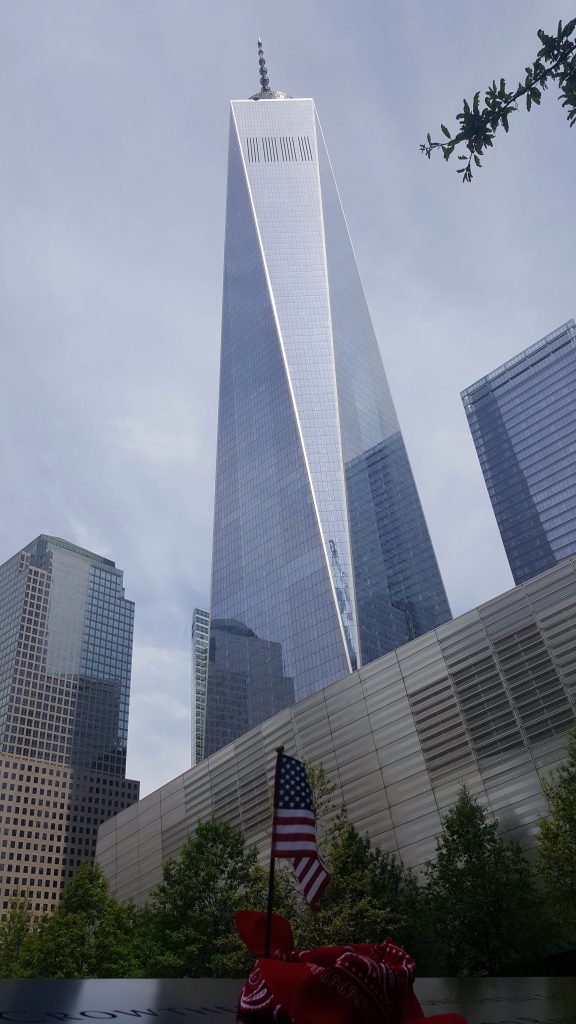 Twenty-one years later there’s a mall with the usual generic shops. Just like anywhere else. Although it’s not.

I remember sitting on top of the world dangling my feet over the edge, glass the only protection. Staring out at the horizon, the planes flying by, so close. I can only imagine if one had turned and headed straight for me … actually I can’t. 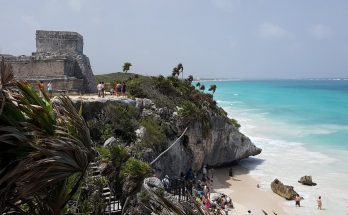 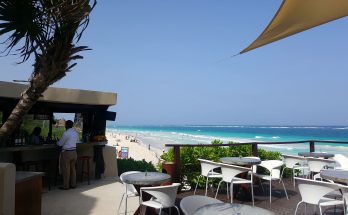 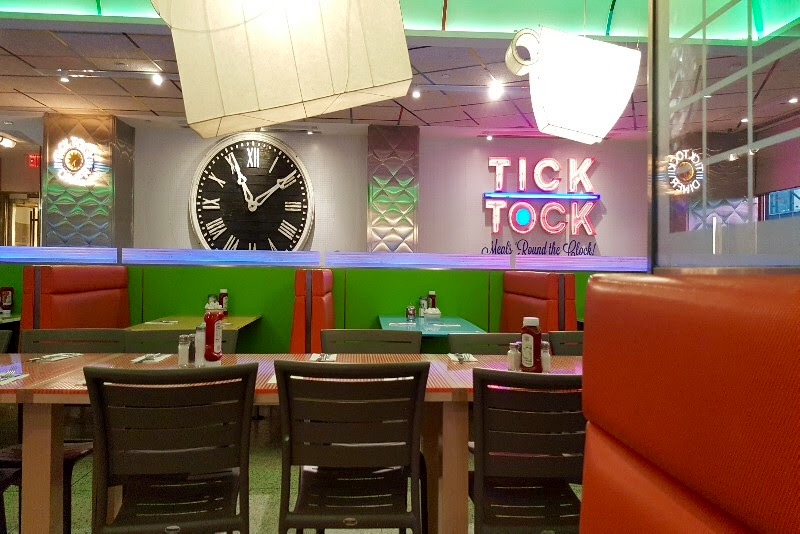 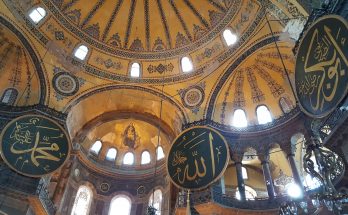 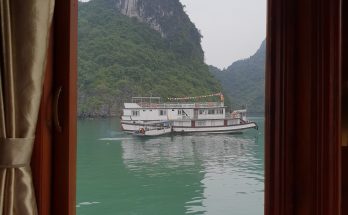